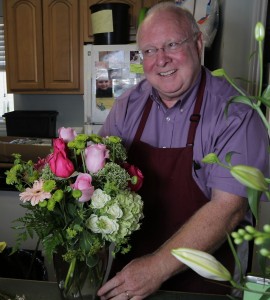 Jim Miles is the genial co-owner of A Classic Bloom. And he, himself, is a classic. Photo by Jake Nielsen/Chronicle

Jim Miles is the co-owner of A Classic Bloom, a small flower shop near the Texas Medical Center.

Five people work for Miles, yet at any given time he’s answering the phone, arranging flowers and delivering them, too.
(For favorite elderly customers, he’s been known to drop off donuts and coffee along with the bouquets.)

Miles, who has been in the flower business for 18 years, says he’s been privileged to participate in the big events in his customers’ lives, everything from births to funerals. He’s also been the messenger in countless apologies, some accepted graciously, some not so much.

“Nope,” one woman told Miles as he offered the flowers ordered by a customer. “It’s over. Take them away.”
Miles loves his family (his wife, Vickie, three children and five grandchildren), his business and his life.

Beginnings: “I grew up in Pine Village, Ind., a farming community. But I didn’t want to stay on the family farm, no. I used to ride the tractor endlessly, and when I’d see an airplane, I’d say to myself, ‘I can’t wait to be on an airplane and get out of here.’ I come from a very tight family, but I’m the black sheep.”

What, if not farming: “I went to Purdue University and majored in restaurant and hotel management. My thinking wasn’t very deep &mdash I just needed to be able to find work.”

Marriage: “I married Vickie when I was 19 and she was 18, and we’re still married 40 years later. We were away from our families, so we had to work out our problems ourselves.”

Moving: “My job took us around the Midwest, but we had an opportunity to move here in 1990. I always wanted to live in a warmer climate and a larger city, and we drove with the three kids through an ice storm in South Bend, Ind. to Houston, which was 75 degrees. It was quite a wonderful transition.”
Reflections on the Bayou City: “This city has an inferiority complex. I want people to relax and not worry about what they’re doing in Dallas. The heat doesn’t bother me, I’m used to it. And I don’t think the traffic is so horrible. I’m used to that, too.”

First Houston adventure: “We stumbled into the Fiesta on Hillcroft, and we saw things we’d never seen for sale in a grocery store. Chicken feet. And goats’ heads.”

We said no: “Both Vickie and I were working for Celebration Station. We’d settled into our home in Missouri City, and our son had just graduated from high school when corporate (bosses) in Chicago said it was time to move back. But we were very happy here, and so we quit. What a gamble. We were both unemployed.”

The next job: “Selling pizza setups for convenience stores stretching all over Louisiana and South Texas. It wasn’t my cup of tea.”

Happy accident: “My son was coming home during a break from Texas A&M, and he applied for a job with a Sugar Land florist. But he wasn’t home yet when the florist called and asked him to make some deliveries. I said, ‘Can I come and do it until he gets home?’ I wanted to save his job for him. So I showed up &mdash and I stayed for three years. That’s where I learned the ins and outs of the business. That particular shop did a lot of phone business, and as I turned out, I like to talk to people on the phone. I think I’m better on the phone than in person.
“Something else about the floral business &mdash it’s close to farming. Funny how I wanted out but I’ve really gone full circle.”

A store of his co-own: “Some friends of ours at church, dentists, own this house and the dental office next door. They were ready to have a steady tenant in here and we all love flowers, so we got together and said, ‘Let’s give it a shot.’ “

Trust: “It’s so nice to have repeat customers who trust me. Some people call and want to micromanage, but it’s really wonderful when they say, ‘Just do your thing.’ That’s the ultimate.”

Building a customer base: “The name of the game is word of mouth &mdash you can’t pay for that. And when I say I’m going to do something, I do it. In all these years, I haven’t missed a delivery.”

But some have been stranger than others: “I took a delivery to one of the hospitals. I knocked on the door, handed the woman the card so she could see who sent it, and then she said, ‘Oh wait, I don’t have anything to tip you.’ And that’s when she flashed me. She thought it was hysterical, but I turned beet red. I didn’t know what to do. (Except run.)”

Too much information: “When people are sending flowers to a hospital or funeral home, they like to tell you the details. They just tell you everything. Of course, it’s part of my job to listen.”
Just say thank you: “Once I delivered some flowers to a woman in the hospital, but she didn’t want them. She said, ‘I told people not to send me flowers.’ Finally we agreed to leave them at the nurses’ station.
“And sometimes husbands will send flowers when they’ve done something &mdash they’re in the doghouse &mdash and they’re trying to make up. Some of the messages on those cards I can’t repeat. I’ll just leave those flowers at the front desk and walk away.”

A beautiful thing: “In this business, we stay with people from the moment they’re born until their last breath. It’s womb to tomb, a phrase I picked up from florists who have been in this business a lot longer than me.”

We take pride in our work, and stand behind every arrangement we deliver. If you are not completely satisfied with your order, please contact us so that we can make it right.

We do not charge service fees! This means that by ordering your arrangement directly from us, you will automatically save money - no coupon codes or special deals required!

All arrangements purchased from us are professionally designed and hand-delivered. No wilted, sad, flowers in a box here! Your bouquet will be exquisitely arranged and ready to be enjoyed.

Our customers are our top priority! When you buy from us, you know that you're working directly with a real, local florist. We will personally ensure that you're happy with your arrangement!

* Free local delivery is available for local online orders only. For orders being sent outside of our local delivery zone, a delivery fee based on the recipient's address will be calculated during checkout.